skip to main | skip to sidebar

Feeling a bit hot under your abaya? Well now there's help. Go out and buy yourself a "TIT" fan! 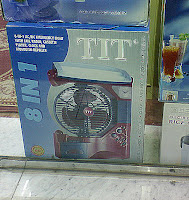 I think I'd need to read the enclosed instructions to see exactly how to use it 8 different ways although I've already deduced a few possibilities; left of, right of, below, above, or between your tata's.

Are you a non-Caucasian in a far-away country and don't recognize racist slurs in English when you see them? Then the "Darky" watch is for you. 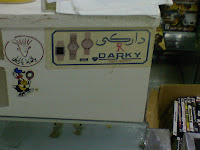 I'm wondering if this is a cruel joke played by the watch-makers or another in a long tradition of linguistic nuances lost in translation (although it's transliterated as "Darky" in Arabic, not translated)
Now's my chance to post some of the pictures that I've been snapping while I'm out and about town. Besides, I don't have it in me to type actual words anyway. A few weeks ago I got to go on another whirlwind tour of Dammam and we stopped at an Applebees to eat. If you remember my issue with Bootyfood, you'll know how special these trips to a western restaurant are. 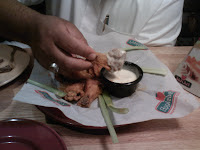 DD got his wings 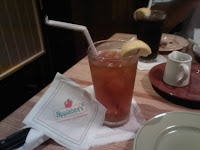 Iced-tea, a particularly reviled drink in my in-laws house. Despite her seeing me make it several times, my MIL still makes the same disgusted face every time she sees me pouring tea over ice! 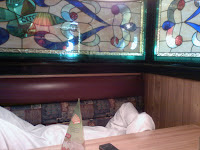 **DD crashes in the booth** Oh, poor baby had to drive two whole hours to get to Dammam! My heart bleeds for you! And apparently, so does my steak...all over my potatoes YUCK! 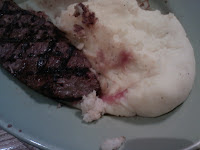 Posted by Saudi Stepford Wife-Daisy at 11:46 AM 10 comments:

How the Grinch Stole Ramadan

In imitation of Dr.Suess, “How the Grinch Stole Christmas”


This “Daisy”
Before marriage,
Liked Ramadan a lot

But then DD,
Who only eats food from Saudi-ville,
Apparently did NOT!

DD made her dread Ramadan!

The whole Ramadan season!
Now, please don’t ask why. No one knows the reason.
It could be that his gut wasn’t digesting quite right.
It could be, perhaps, that his belt’s fitting tight.
But I think that the most likely reason of all
May have been that his belly’s not at all small.

But,
Whatever the reason,
His belt or his poo
He becomes the Grinch during Ramadan, and makes Daisy blue
Staring down at Daisy’s food with a sour, Grinchy frown
At the warm, cooked meal below as he tossed a fork down
For he knew every Saudi during Ramadan ate tons of food
And his wife’s low-cal food puts him in a bad mood

“And they’re making lugaymat*!” he snarled with a sneer.
“This food’s not for Ramadan! It’s salad, my dear!”
Then he growled, at his wife he was looking
“I MUST find a way to keep Daisy cooking!”
For, during Ramadan, he knew…


…All the Saudi kids don’t sleep at night, instead,
Would stay up till bright and early. Then rush to their beds.
And then! All night noise! Oh the noise! Noise! Noise! Noise!
That’s one thing Daisy hated more than the cooking, THE NOISE!

Then the Saudis, young and old, would sit down to a feast.
And they'd feast! Not pray more, just feast!
And they'd FEAST! FEAST! FEAST! FEAST!
They would start on custard, and greasy, fried samboosa**
Which Daisy wouldn’t cook cuz of the DD’s large karsha***.

And then, they’d do something most important of all!
All good Muslims in Saudi-ville , the tall and the small,
Would stand close together, with the Qur’an blaring
They’d stand shoulder to shoulder, and the Muslims would start praying!

But hungry DD had a different idea!
An awful idea!
THE GRINCH GOT A WONDERFUL,
AWFUL IDEA!
"I know just what to do!" The Grinch Laughed in his throat.
And he made a decision “on me she must dote”.
And he chuckled, and clucked, "What a great Grinchy trick!
"I’ll have an attitude problem, I'll act like a big dick!"
"All I need is a threat..."
The Grinch looked around.
But since Daisy’s so mellow, there were none to be found.
Did that stop the old Grinch...?No!
The Grinch simply said,"If I can't find a threat, I'll make one instead!"
So he called his Mom, and his older sister too.
And he told them “From Daisy’s cooking, I’ll soon be dead”.
After whining to his mom, he went to her house to feast!
He devoured so much food, he resembled a beast!
He cleaned out that icebox as quick as a flash.
Why, that Grinch ate every last bit of their hash!
And the one speck of food
That he left in the house
Was a crumb that was even too small for a mouse.
Then
He did the same thing
At his sisters’ houses
Leaving crumbsMuch too small
For the other families’ mouses!

He stuffed all the food in his big mouth with glee.
"And NOW!" grinned the Grinch, "I’ll make them pity me!"
And the Grinch told his mom, “Daisy’s food really lacked”
That’s how Daisy’s Ramadan got hijacked.
He turned her month into one long cooking spree!
With so much hard work, there’s hardly time for prayer free.
It was quarter past dawn...
All the Saudis, went a-bed
All the Saudis, went a-snooze
This is Ramadan since Daisy wed
It’s been a life of baking! Frying! Chopping!
No energy left, even for Eid shopping!

And the Grinch, with his grinch-belly bloated with grub
Has caused Daisy to bite her nails to a stub.
About Daisy’s cooking he constantly nags,
And of his mom and sisters he frequently brags.
Because of DD appetite, Ramadan’s such a chore
Trying to concoct things she’s never cooked before.
Her culinary creations, the in-laws now abhor
“What a bad wife she is for the son we adore”

And what happened then…?
Well…in Saudi-ville they say
That DD’s jelly-belly
Grew three sizes in one day!
And once his belly didn’t feel quite so light,
You’d think he wouldn’t take another bite.
Rather than grazing all night, he could go and join prayers,
To save his soul and forgo angry Daisy’s stares.

Boy am I gonna hear about this when DD reads it LOL!
Inshallah yours will be a more Islam-centric Ramadan.

Update on the pursuit of my degree

Don't worry...I'm not goofing off. Put the whip back Hema!

I temporarily don't have access to several resources, crucial to my dissertation, so I thought I'd take a few hours break and write something fun for a change.

Update #1: Buddy's fever is gone now and despite how deathly ill he appeared at first, he only got about 2 dozen spots on his body. And his babba decided to shave his head to make his hair grow in thicker.

Update #2: I actually think I may be able to get my dissertation done. At some point, after I'm finished, I'm going to detail the uphill struggle it's been. Unfortunately, it's shared by many mothers all over the world but even more acutely by women in Saudi Arabia.

Update#3: Ramadan is due to start and since I'm trying to finish up my paper, the month is going to be completely ruined for me as well as affecting my family. For all of my non-Muslim readers, just imagine working through Christmas on through New Years while everyone around you is celebrating. It's gonna bite.

I'd like to take a moment to thank Cairogal and Hema for their support with my studies...it helps to have people backing you up:)
Posted by Saudi Stepford Wife-Daisy at 8:20 AM 5 comments:

A pox on all your houses

If I were a Hasawi, I'd think y'all gave me an eye. You were so jealous at the thought of me earning my Masters that your collective bad will found its way to my family from all corners of the globe and inflicted poor little Buddy with Chicken Pox at the same time he's teething. The result: a naked, drooling, inconsolable, polka-dotted 10-month old baby with nothing but wet towels and ice-packs over him to cool his 104F (40C) fever for the past three nights. I have the night shift when his fever's the worst and must be monitored carefully, and my housekeeper is taking him for a few hours in the afternoon so I can get a few ZZZ's.

This is not conducive to finishing my dissertation!

At least I'm not so arrogant as to really believe that the entire cosmos was nefariously aligned, at the whim of a blogging ne'er do well, just to malign little 'ol me. But then again, I'm not Hasawi.
Posted by Saudi Stepford Wife-Daisy at 12:37 AM 7 comments:

Desperate Daisy won’t be blogging for a while

As if I haven't neglected my blog enough these past few weeks, now I need to take it a step further. I've been informed by the University from which I haven't technically graduated from that if I don't get my butt in gear and submit my dissertation, they'll give me a zero for it. This means that I'll graduate with a Masters degree with a big, fat, ugly D- written on my transcripts for my accumulated GPA once they've averaged the zero for my dissertation which will negate all the rest of my hard work. Imagine applying for a university lecturer's position like that:

Daisy (to perspective employer at a Saudi University): "Oh yes, I do have fancy, expensive degrees from a well respected and highly ranked English university and would like you to give me an academic position and a fat paycheck every month . "

Perspective employer: "How impressive! May I see the transcripts you're hiding behind your back?"

Daisy: "Is that really necessary? My diploma is really pretty and decorated with an official seal and calligraphy. It's proof that I really did pass…can't that be enough?" 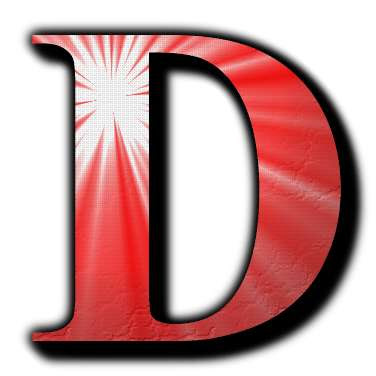 It's now or never folks. Please root for me these next few weeks as I work sleep deprived, with a lack of resources and through the din of my children all vying for mommy's attention. I'm sure I'll get the dissertation equivalent of "Final-itis", the dreaded affliction of students around the world come assessment time, and think of witty and positively brilliant posts to write instead of working on my thesis. If that should happen, I need all of my readers to gang up on me and redirect my focus back onto my dissertation until I've finished to avoid the dreaded "D".

What's going on in my life? Why I made this blog

For any woman, no matter her origins, there are elements of Stepford in every town in every country. I'm in Stepford Saudi Arabia. I'm constantly struggling to maintain my identity and individuality and not to have 'me' swallowed up by the family unit or by what’s expected of me. Hence, the name "Saudi Stepford Wife" seemed applicable. I'm referring to the first movie, made in '75, in which the gender politics of the '70's is exaggerated. Much of the discourse taking place at that point in time is similar to issues where I am today. The movie includes perfect robotic housewives who do nothing but bake, get their floors to shine, and ponder the wonders of Easy-Off spray. They look stunning and live only to please their husbands while the protagonist tries desperately not to be assimilated by them. This is about MY life and MY experiences within this town which will differ from everyone else's so please, hold the emails defending Al-Hassa. ِِِِI'm an educated mother of three and I want to tell you about my life and my observations.